Babcock has been awarded a 10-year contract to provide dry-dock maintenance for the Royal Navy’s Queen Elizabeth-class (QEC) aircraft carriers, the company announced on 16 May.

The new £30 million ($36.8 million) contract follows a previous maintenance period in which Babcock completed the first docking for HMS Queen Elizabeth at Rosyth in 2019, and includes all routine maintenance and repairs that cannot be conducted when the vessel is afloat. In addition to the scheduled dockings, Babcock will provide facilities for any contingency dockings required over the 10-year contract duration. The first planned activity will take place next year with a six-week work package.

This is a significant milestone for big ship dockings at Rosyth, which was the integration site for the UK carrier build and assembly programme from 2008 to 2019. Babcock has invested more than £100 million in skills, digitisation and site infrastructure over recent years at Rosyth. This is now one of the UK’s most modern, capable and competitive manufacturing and repair facilities for large-scale marine and energy programmes, with a workforce of approx. 2,000.

Alongside traditional maintenance practices, the ships’ docking period will further benefit from the digital transformation underway at Rosyth, which is already in place to support build and assembly of the Royal Navy’s new Type 31 Inspiration-class frigates.

Sean Donaldson, Babcock’s Managing Director of Marine Engineering and Systems and the Rosyth site, said “The investments in our Rosyth infrastructure and facilities over the last 10 years mean we are ideally placed to deliver projects of this size and scale. The programme will also benefit from the extensive knowledge and expertise of Babcock’s skilled workforce which is steeped in carrier experience. It’s a really proud moment for us.”

With an expected service life of up to 50 years, the aircraft carriers are highly versatile and potent joint defence assets, able to meet a wide range of tasks globally. They are the most capable and powerful surface warships ever built in the UK. 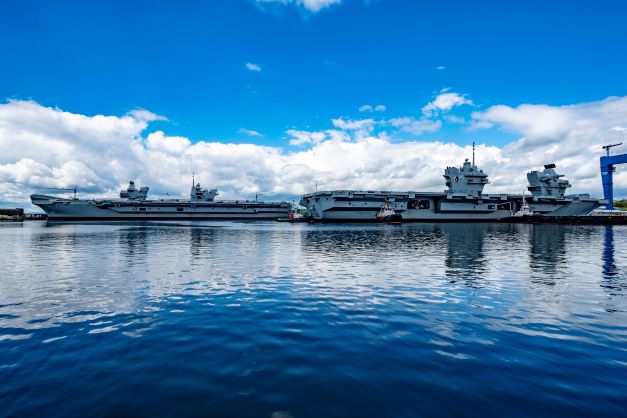 The two RN aircraft carriers will remain one of Babcock’s flagship programmes. (Babcock)