Leonardo and the Italian government signed an acquisition contract on 12 January for the AW169M Light Utility Helicopter for Austria’s Ministry of Defence.

The government to government deal, valued at €346 million ($397 million) calls for six AW169Bs, 12 AW169MA (the advanced multi-role variant with integrated mission equipment and weapon systems) and a comprehensive customised support and training package, as well as options on a further 18 airframes. The aircraft, which will replace Austria’s fleet of Alouette III helicopters acquired in the 1960s, will be used on a wide range of missions for the Austrian armed forces, from troop transport and combat operations to disaster relief and mountain rescue. Deliveries, which will commence this year, are scheduled to be completed by 2026.

Austrian crews will leverage initial training delivered with the support of the Italian Army and its expertise as an AW169M LUH operator, and will also benefit from the provision of dedicated training and simulation devices. Pilots benefit from a latest-generation, open-architecture avionics suite, including a fully-digital glass cockpit with excellent external visibility, providing advanced tactical and situational awareness. Over 300 AW169 helicopters have been ordered or optioned to date worldwide, for missions ranging from utility and surveillance operations to firefighting and maritime patrol. The 130+ aircraft already in service have logged in excess of 100,000 flight hours. 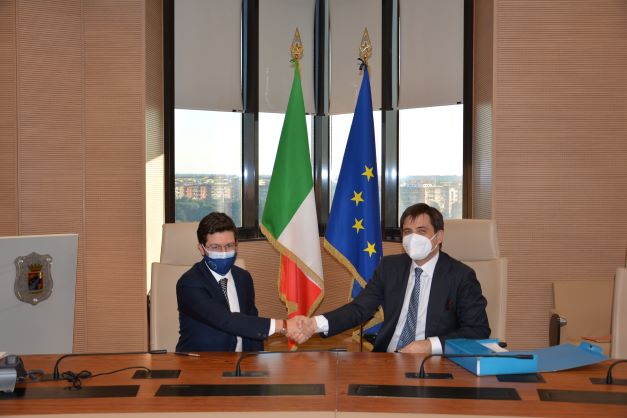 Leonardo and the Italian government have signed the contract allowing production to commence for the Austrian AW169M LUH order for 18 aircraft. (Photo: Leonardo)