The Australian government announced on 27 April it is gifting six M777 155mm lightweight towed howitzers and associated ammunition to Ukraine, as Russia steps up its offensive in the Donbas region. Canada also recently announced it is sending four of the same weapons to Ukraine.

The Australian move follows a request by the United States and the Ukrainian Ambassador to Australia for heavy artillery weapons and ammunition. The government said it would not disclose delivery arrangements “at the direct request of Ukrainian officials and other partners.”

This additional A$26.7 million ($19.02 million) in military assistance takes Australia’s total contribution to Ukraine to over A$225 million. Canberra has previously announced the donation of 20 Bushmaster Protected Mobility Vehicles, including two ambulance variants, following a direct request from President Zelenskyy. Among other items announced for delivery by Australia are tactical decoys, AUVs, and UGVs, rations and medical supplies.

In addition, Canberra is providing A$65 million in humanitarian assistance, with a focus on protecting women, children and the elderly, including food, shelter and emergency medical supplies. Australia is also providing at least 70,000t of thermal coal to power Ukraine’s resistance. The Australian government said it will continue to identify opportunities for further military assistance where it is able to provide “a required capability to the Ukraine Armed Forces expeditiously.” 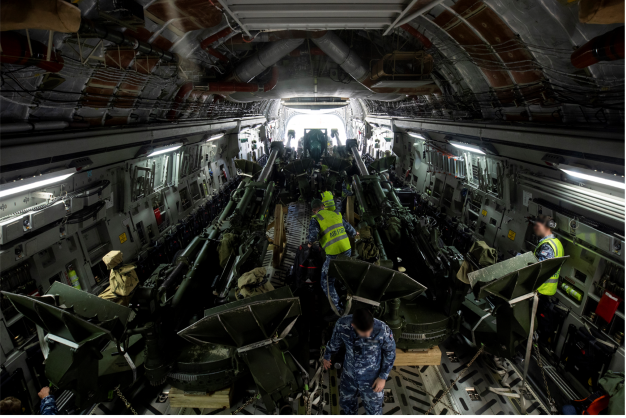 M777s on board an RAAF C-17A bound for Ukraine. Image altered for maintenance of operational security. (Australian DoD)