The Australian government announced a set of additional support measures for Ukraine on 20 March, accompanied by further punitive actions against Russia to help ensure Moscow “pays a high price for its blatant violation of the UN Charter and its disregard for international humanitarian law”.

Canberra stated it has put together an additional A$21 million ($15.5 million) package of defensive military support for the Ukrainian armed forces, pointing out that this will bring Australia’s total military assistance so far to A$91 million. “To meet Ukrainian priority requests, this package will comprise additional material from Australian Defence Force stocks,” said the government, adding that it has also committed an additional A$30 million in emergency humanitarian assistance. This contribution will focus on protecting women, children, the elderly and the disabled, and take the total to A$65 million, it noted.

Meanwhile, Canberra said it has imposed an immediate ban on Australian exports of alumina and aluminium ores (including bauxite) to Russia, to limit the latter’s capacity to produce aluminium – a critical export for Russia. Aluminium is a global input across the auto, aerospace, packaging, machinery and construction sectors, and a critical input into the  defence industries, with Russia relying on Australia for nearly 20% of its alumina needs, according to DoD.

Canberra also said it has imposed a total of 476 sanctions on 443 individuals, including many oligarchs close to Putin, and 33 entities, including most of Russia’s banking sector and all entities responsible for Russia’s sovereign debt. 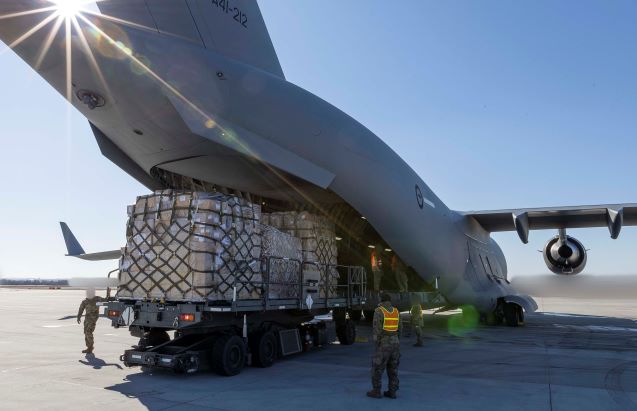 A C-17 of the RAAF ready to transport assistance to Ukraine. (Australian government)