TRX and MUTT Displayed Alongside M-SHORAD

General Dynamics Land Systems (GDLS), having been invited to attend the US Army’s Remote-Controlled Vehicle – Medium (RCV-M) testing event in FY2022, will be highlighting some of its unmanned developments during AUSA 2021 in Washington, DC, this week.

Even though GDLS was not one of the two companies selected to provide robotic systems under the RCV-M programme, Tim Reese, Director of US Business Development, told MON its Tracked Robot 10t (TRX) platform (launched at AUSA 2020) had “performed well” at separate test events. “We were focused on winning the Small Multipurpose Equipment Transport (S-MET) programme for the Infantry Brigade Combat Teams (IBCTs) at the time, so we weren’t ready with our 10t vehicle – but we are now,” he said.

According to Reese, the TRX completed experiments at Fort Benning in March, demonstrating logistics re-supply capabilities, and in early September at Fort Leonard Wood, where it was fitted with an obstacle reduction engineering package. “That is what has earned us an invitation to participate in next summer’s RCV-M large-scale robotic exercise event at Fort Hood, even though 18 months ago we were not invited,” Reese explained. The Army has asked GDLS to bring the TRX to Fort Hood fitted with the same package.

TRX is a flat-bed robotic vehicle that Reese terms “mission-agnostic,” designed to be multi-role and multi-mission. To emphasise this point, the TRX on display at AUSA 2021 is fitted with representative Aerovironment SWITCHBLADE 300 and 600 loitering munitions. “This is to meet the indirect fire needs of the artillery center at Fort Sill,” Reese explained, “The loitering munition capability is exciting; nobody has done direct experimentation with it yet, but I have a feeling we’ll be doing it next year with real munitions.”

GDLS has formed a partnership with Aerovironment to integrate SWITCHBLADE launchers onto the vehicle. Elsewhere, GDLS is also working with UVision to integrate its HERO range of loitering munitions onto USMC LAV-25s, under the Organic Precision Fires – Mounted (OFP-M) programme.

Meanwhile, the company is also displaying the 8×8 Multi-Utility Tactical Transport (MUTT) UGV it is building under the S-MET programme. Following a $249 million (€215 million) Army contract awarded in July 2020, GDLS delivered seven initial MUTTs in May. Reese explained these are undergoing customer acceptance review and testing, to mature the new configuration that includes increased performance expectations, including operating range, payload capacity and use of the new World Wide Radio on the vehicle and in the soldier controller.

He also says the US Army’s First Unit Equipped (FUE) date has been put back, from late this year to early 2022, to allow for completion of the additional work and performance evaluations. This is a further delay, as original plans called for initial fielding in Q2 FY2021.

“It is a brand new capability, the Army’s first ground robot for the infantry brigades […] We and the Army are learning new things and it is a combined learning exercise,” Reese observed, adding that, once production gets underway, the company would be producing about a couple of dozen MUTT UGVs per month. GDLS is simultaneously experimenting with new variants for autonomous resupply, counter-UAS, CBRN defence; ISR; EW; and both direct and indirect fire roles.

The company will also display 3D models of its 8×8 STRYKER vehicle. GDLS was contracted for about $1.2 billion in October 2020 to integrate the Leonardo DRS Manoeuvre Short-Range Air Defence (M-SHORAD) system onto US Army STRYKERs. M-SHORAD includes a Moog Reconfigurable Integrated-weapons Platform (RIwP) turret, hosting a RADA AESA radar, EO/IR sensors, both STINGER and HELLFIRE missiles, an M230 30mm cannon and an M240 7.62mm machinegun. Although the FY2022 budget only provided funding for 37 M-SHORAD STRYKERs, Reese believes that, because the Army wants to equip its first four battalions, the rate will increase.

GDLS is building three directed energy (DE) air defence variants of STRYKER. The laser is being developed by Raytheon and Reese said the first DE-SHORAD vehicle went through a fire assessment in May and “[…] was deemed worthy enough” to get approval for the batch of three, which will be allocated to a unit in 2022. This variant is suited to the counter-rockets, artillery and mortars (C-RAM) role.

A third variant is also under development, in partnership with Epirus, using high-powered microwaves. Reese said that HPM, using a radar, is designed to defeat entire swarms of drones at specific ranges and azimuths without a hard-kill explosion or laser burning, and to damage unprotected electronic devices. “We are still doing that with internal development funds and we are going to try to bring that to demonstration in the summer of FY2022,” he told MON. 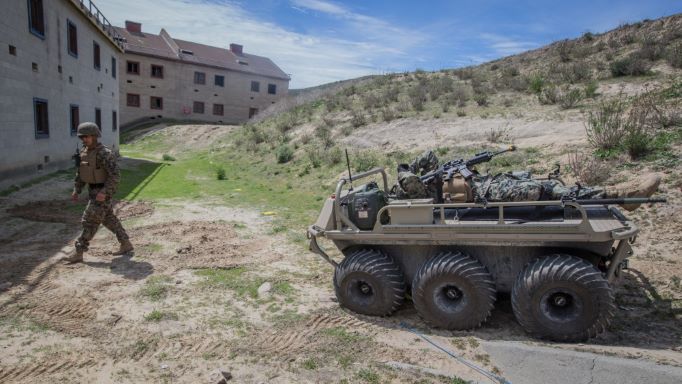