AUSA 2021: Elbit Eyes Next Shoot-Off Round for ATMOS

Fast Into and Out of Battery

Elbit Systems of America’s Autonomous Truck Mounted Ordnance System (ATMOS) IRON SABRE 155mm/52cal self-propelled gun, manufactured by Soltam Systems, was mounted on a Rheinmetall 8×8 truck during its successful performance earlier this year in the Army’s 155mm Mobile Howitzer Shoot-Off Evaluation. Dave Richards, Senior Director of Fire Programs at Elbit Systems of America, stated “The Rheinmetall platform performed very well in the harsh environment at Yuma Proving Ground, and was very well received, as it is battle-tested. It is also a widely-used vehicle that fully meets the US Army’s current requirements. We are still working with the government to decide on any configuration changes for the next phase.”

ATMOS can ‘shoot and scoot’ in just two minutes: 30s to stop and set up, 60s to fire “six or seven” rounds, and 30s to get moving again. It also features a top road speed of 80km/h. “It’s designed for speed, both in transit and in emplacement,” Richards told MON. The ATMOS IRON SABRE was supported by five crewmembers during the evaluation: a chief of section, gunner, driver/ ammunition chief, and two cannoneers. “While the system can be operated by three crew members, US doctrine will best support a five-person crew. More importantly, the ATMOS IRON SABRE has been tested to verify that the current MOS [Military Occupational Specialty] supporting the M777/M198, 13B, will continue to be used for ATMOS,” he added.

He further emphasised ATMOS’ modularity, indicating the architecture allows Elbit to migrate to another vehicle, as requirements evolve. Elbit Systems of America is further eyeing the second phase of the Army’s initiative, to help inform its decision about a new howitzer. In a bit of acquisition process irony, while a howitzer replacement is not in the service’s programme of record, the next evaluation phase is advancing under a fast-track, OTA (other transaction authority) contract. 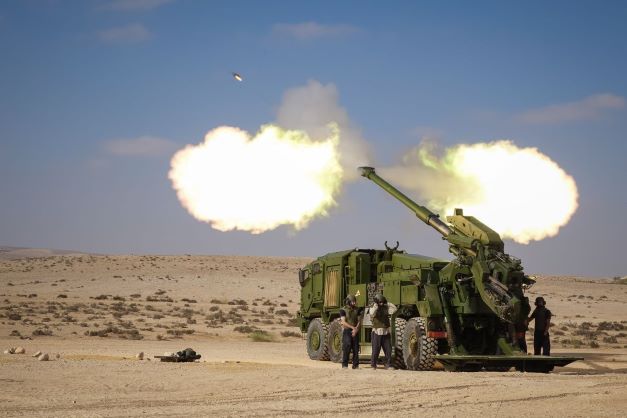 ATMOS (pictured) will compete in the next US Army shoot-off round against the likes of BAE Systems' ARCHER. (Photo: Elbit Systems of America)