Germany, Japan and Korea in Prospect

Heather McBryan, Director of Global Sales & Marketing, noted there are more than 900 CHINOOKs worldwide, in 20 nations, including eight NATO members. “We continue to see strong interest across the world in CHINOOK , whether that be for Block I or Block II. [We have] delivered 14 to the Netherlands under Foreign Military Sales (FMS) and we’re working through the Direct Commercial Sales for the remaining six aircraft that we will deliver through the next year. We have also delivered our first CHINOOK to US government under FMS for Spain in August. That aircraft will deliver in country next year.”

Boeing is working to determine whether existing customers seek to upgrade their airframes to Block I F standard or, in the future, to Block II. “We also have other campaigns for new CHINOOK users. One of the biggest ones is in Germany. While there is not much we can say, what we will say is we are aggressively preparing for the German campaign – understanding their requirements and where they are headed. When they are ready with that programme, we’ll be positioned to support it,” McBryan added. She also noted the company is in discussion with Japan and Korea regarding possible upgrade plans, while Andy Builta, VP and H-47 Program Manager, called the United Kingdom “one of the most passionate CHINOOK customers,” given it was the first international customer to buy the Block II.

Following official notification of Australia’s intent to increase its fleet with two aircraft this year and another two in 2022, he concluded “You’ll see Congressional notification, hopefully soon, for another customer. We have to wait for that and can’t comment now.” 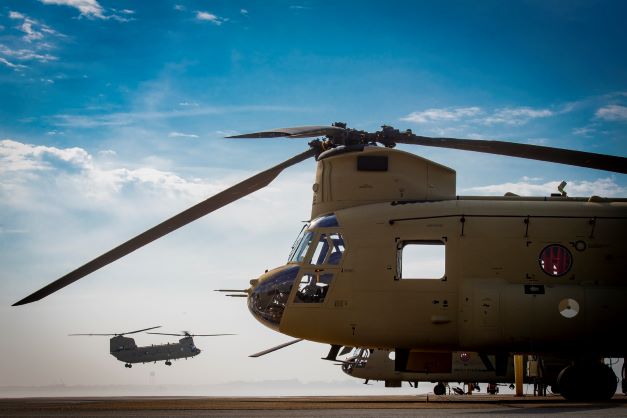 14 CH-47s have already been delivered to the Royal Netherlands Air Force under an FMS contract. (Photo: Boeing)