The United States and Britain have agreed to exchange sensitive, classified naval nuclear propulsion information with a third country for the first time. Known as the ‘Exchange of Naval Nuclear Propulsion Information Agreement,’ the recently-signed deal is part of the AUKUS security pact announced in September between the two nations and Australia, and will allow such information to be shared with Canberra to help it acquire nuclear-powered submarines for the RAN.

In a 22 November statement, Australian Defence Minister Peter Dutton said the agreement will support his country in completing “the 18 months of intensive and comprehensive examination of the requirements underpinning the delivery of nuclear-powered submarines”.

It will also provide a mechanism for Australian personnel, including engineers and submariners, to access training and education from their UK and US counterparts on how to build, operate and support nuclear-powered submarines, the Minister continued. “Australia is not seeking nuclear weapons. The submarines will be conventionally-armed. The agreement only allows for the sharing of naval nuclear propulsion information. No nuclear equipment can be transferred under this agreement [and the deal is part of] our collective efforts to ensure the Indo-Pacific remains stable, secure and prosperous, and free from coercion”.

Australia now plans to locally build at least eight SSNs with US and UK assistance under AUKUS, to replace its current fleet of six COLLINS-class SSKs. The security partnership goes beyond sharing SSN-related technology: Prime Minister Scott Morrison spoke on 16 November of plans to further enhance interoperability and joint capabilities, including in the areas of artificial intelligence, quantum technologies and cyber. 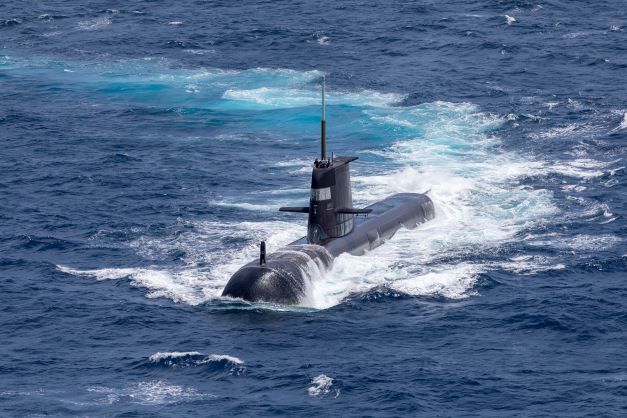 Australia plans to replace its COLLINS-class SSKs with SSNs built in collaboration with Washington and London. (Photo: Australian DoD)