There are more ‘players’ in the air-to-surface missile (ASM) game than in the world of air-to-air missiles (AAM). This is perhaps because the technological threshold requirements for ASM manufacture are lower than for AAMs, or perhaps because they have tended to be more urgently required. It is impossible to list all current ASM programmes in an article of this nature.

On one level, AAM development has been straightforward – simply aiming to produce weapons with the best possible performance and maximum lethality. In recent years, the same has not always been true in the field of ASMs, where the demands of asymmetric warfare have sometimes prioritised low cost. Air forces have sometimes asked for weapons with reduced net explosive effect, lower blast radii and minimal shrapnel in an effort to reduce and minimise collateral damage.

This demand requires great precision and discrimination, which has been one of the factors underpinning the shift from ‘dumb’ unguided ordnance to precision guided munitions (PGMs). And there has certainly been a shift. In the first Gulf War, less than 10% of the weapons dropped were PGMs but by September 1995, when NATO forces attacked Bosnian Serb forces in the former Yugoslavia, 98% of the weapons used by US Forces were PGMs.

The growing use of PGMs has resulted in a real change in the level of effort required to achieve an objective. At one time, planners would try to calculate how many sorties would be required to destroy a target, whereas now they tend to calculate the number of targets that can be destroyed in a single sortie. In the Balkans, each target or designated mean point of impact (DMPI) required more than six ‘dumb’ bombs to be destroyed, on average, or less than half that number of PGMs.

There has also been a shift from dropped, free-fall weapons to powered, direct fire weapons – in other words from bombs to missiles.

ASMs can be broken down into a number of sub-categories, including air-launched cruise missiles (ALCM), dedicated anti-radiation missiles (ARMs), anti-tank guided missiles (ATGMs), and air-launched anti-ship missiles. Many ASMs fit none of these categories, while a few fit several of them, and there is a huge variation in types of guidance, range and in the size and nature of the warhead.

With longer range and low radar cross section, the latest ALCMs have revolutionised air power operations. It often used to be necessary to use dedicated Low Observable (LO or ‘stealth’) attack aircraft to bomb highly defended targets, or to ‘kick down the door’ for following waves of conventional aircraft, but these roles can now be performed by using stealthy cruise missiles, launched from outside the range of enemy air defences. The US/British/French air attacks against Syrian chemical weapons facilities in April 2018 saw the combat debut of the US AGM-158 JASSM, backed up by British STORM SHADOW and French SCALP cruise missiles.

The longest ranging cruise missiles in service include the US AGM-86 (nuclear-armed n AGM-86B form, conventional in AGM-86C form), which can fly for more than 2,400km (1,500 nm). The AGM-86 will eventually be replaced by the shorter-range AGM-158B JASSM-ER in the conventional role, and by the Long Range Stand Off Weapon (LRSO), for which Raytheon and Lockheed Martin received separate $900 million contracts in 2017 to develop competing designs to meet the requirement. A single winner will be selected for further development in 2022.

Chinese cruise missile development benefited significantly from the acquisition of Western and Soviet missile technology during the 1990s. Kh-55 missiles were purchased from Ukraine, and the wreckage of unexploded TOMAHAWK missiles was reportedly acquired from Iraq, Pakistan, and Serbia.

The result was the KD-20 (also known as the DF-10K), the first truly modern Chinese long-range cruise missile. Based on the earlier CJ-10/DH-10/DF-10 land-based cruise missile, the KD-20 entered service with the PLAAF in about 2009. The missile uses INS and Terprom (Terrain Profile Matching) for navigation. A new variant is believed to use a high-definition imaging radar for terminal guidance.

The proliferation of very long-range, turbojet-powered cruise missiles has been limited by cost, the need for large launch platforms, and by the terms of the Missile Technology Control Regime (MTCR), an informal and voluntary partnership among 35 countries aimed at preventing the proliferation of missiles and UAS capable of carrying a payload of 500kg or more over a range of more than 300km, using the most fuel-efficient flight profile.

With a range in excess of 560km and a 450kg warhead, MBDA’s STORM SHADOW is notionally outside the MTCR’s definition of a cruise missile, but when the UK and France sold a variant (the so-called BLACK SHAHEEN, which notionally had a 400km range) to the UAE in 1998, the USA objected strongly and insisted that the MTCR adopted new definitions of range and payload in 2002.

STORM SHADOW is the British variant within a wider family of cruise missiles, all derived from the original MBDA APACHE anti-runway missile, which carried a payload of submunitions rather than a warhead. The SCALP-EG is essentially the French STORM SHADOW, while the TAURUS KEPD 350 is its German/Swedish cousin – similar enough for KEPD 350 carriage tests to have formed part of the initial STORM SHADOW integration effort on the Eurofighter TYPHOON, despite being powered by a different engine (a turbofan rather than a turbojet), and with a different warhead.

The USA’s closest rival is the AGM-158 Joint Air-to-Surface Standoff Missile (JASSM), which has a similar sized warhead but a shorter range of just 370km, though an extended range variant, the AGM-158B JASSM-ER, can reach more than 925km thanks to a more efficient engine and larger fuel volume.

JASSM has been exported only to Australia, Finland and Poland, and the USA’s main ASM for export customers remains the AGM-84H/K Standoff Land Attack Missile-Expanded Response (SLAM-ER), which has a 270km range and a 221kg warhead. SLAM-ER has been sold to Saudi Arabia, Qatar and South Korea for use on the F-15, and to Turkey and the UAE for carriage by the F-16. South Korea also planned to order 200 longer range JASSM missiles to integrate on the F-15K SLAM EAGLE, but when these were refused by Washington ordered the KEPD 350 TAURUS instead.

A powered version of the AGM-154 Joint Standoff Weapon (JSOW), the JSOW-ER, is under test, promising a range of up to 560km when dropped from high altitude, compared to the original unpowered version’s 70km reach.

Rafael offers the SPICE family (more about that here), while the Israel Military Industries (IMI, now Elbit Systems) DELILAH missile can function as a conventional cruise missile or as a loitering munition. It has a 30kg warhead and a 250km range.

Another specialised family of missiles is used for the suppression of enemy air defences (SEAD), using seekers that can home in on enemy radar emissions to attack the antennas, radar heads and often the receiver/transmitter vans of targeted radars.

The Raytheon AGM-88 High-Speed Anti-Radiation Missile (HARM) is the most widely deployed weapon of its type, but has been in service since the mid-1980s. Upgraded versions have been deployed, but the USA is now looking at new weapons.

In the longer term, dedicated anti-radiation missiles (ARM) seem likely to give way to more versatile weapons with multi-mode seekers, including radar, multispectral, IIR, laser and GPS, with enough computer processing power and memory to be able to interpret very different sensor inputs and to attack very different target sets. An AMRAAM AAM replacement could also be a successor to the HARM ARM. The US has launched the Joint Dual Role Air Dominance Missile and Triple Target Terminator programmes to develop such a capability.

In the shorter term, the US Navy is funding an extended range AARGM-ER that will marry the existing guidance system and warhead of the AGM-88E Advanced Anti-Radiation Guided Missile (AARGM) with a new integrated rocket-ramjet engine. This is being developed by Orbital ATK, while Raytheon is developing a similar AGM-88F HARM Control Section Modification (HCSM) missile that incorporates similar features.

BAE Systems’ Air Launched Anti-Radiation Missile (ALARM), still in use by the Royal Saudi Air Force, has a novel loiter mode for use if the target radar turned off. ALARM was able to deploy a parachute and descend slowly until the target radar emitted again, when the rocket motor would re-ignite.

Another specialised category of missiles is used against enemy surface vessels. Some anti-ship missiles have used air-breathing turbojet engines to achieve long range, and some have been designed to attack at very low ‘sea-skimming’ levels – delaying detection by the enemy ship’s defensive systems. Increasingly, sea-skimming attack profiles are being married to very high speed (and even hypersonic) performance, further complicating the task of countering these lethal ship killers.

At the other end of the spectrum, there is a buoyant market for smaller, lighter, shorter-ranged missiles for tactical use – whether against tanks, soft-skinned vehicles, small boats or other targets. The AGM-65 MAVERICK is an example of this category of weapon, and is the most widely produced precision-guided missile in the Western world. Having entered service in 1972, the MAVERICK has been exported to more than 30 countries and integrated on 25 aircraft types. A range of MAVERICK variants has been produced, using laser, electro-optical, IR and IIR guidance systems, and two types of warhead.

The AGM-114 HELLFIRE was developed as an anti-armour weapon, but has become the primary lightweight air-to-ground precision weapon for the US armed forces and for a number of export customers.

A Joint Common Missile (JCM) with a tri-mode seeker and a multi-purpose warhead was developed to replace the HELLFIRE and MAVERICK, but was cancelled in the FY2006 budget. A new Joint Air to Ground Missile (JAGM) is now under consideration to replace both weapons. The JAGM programme will be delivered in increments, with Increment 1 adding a millimetre-wave (mmW) radar to the HELLFIRE-R to give it a dual-mode seeker.

The MBDA BRIMSTONE was originally designed as a ‘fire-and-forget’ weapon for use against mass formations of enemy armour, using a mmW active radar homing seeker. Laser guidance was later added to produce the dual-mode BRIMSTONE missile, whose tandem shaped charge warhead is highly effective against modern tanks while giving a small blast radius that minimises collateral damage. The DUAL MODE BRIMSTONE formed the basis of the BRIMSTONE 2, developed under the Selective Precision Effects At Range (SPEAR) Capability 2 Block 1 programme, which has an improved seeker, a more modular design and a “more than 200% increase” in maximum range.

MBDA is now working on SPEAR 3, a longer-range weapon that will make substantial reuse of BRIMSTONE modules, but that will feature a multimode seeker with INS/GPS guidance, a datalink and a Hamilton Sundstrand TJ-150 turbojet powerplant. Four SPEAR 3 missiles will fit with a METEOR AAM in each internal weapons bay of the F-35B, and the weapon will be integrated with the Block 4 F-35 software package.

Jon Lake is a senior aerospace expert and a regular contributor to MONCh. 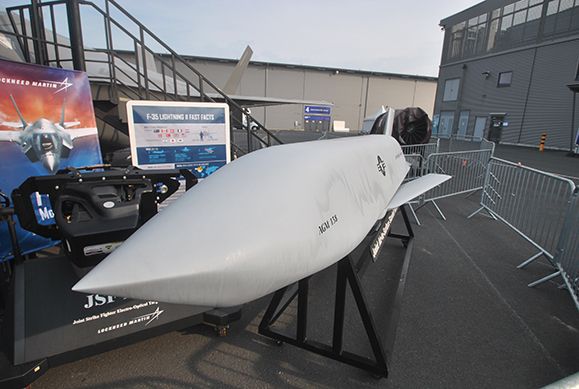