New variants of the ASCOD family of tracked vehicles

ASCOD MMBT: With a GVW of 42t, it is fitted with Leonardo‘s modern 120mm manned turret system, armed with a 7.62mm coaxial machine gun. The 120mm smoothbore gun fires standard NATO ammunition and is coupled to a computerised fire control system giving the commander and gunner stabilised day/thermal sights incorporating a laser rangefinder.

This vehicle is shown with Elbit Systems‘ UT30MK2 unmanned turret, encompassing a broad range of weapon systems, countermeasures and advanced electro-optics providing combat-proven firepower for armoured personnel carriers. This turrent includes Orbital ATK‘s proven BUSHMASTER (For more on this, please see here). Furthermore the company’s IronVision is mounted on this new ASCOD platform. It is a groundbreaking Helmet Mounted Display (HMD) system for AFVs that provides a 360-degree panoramic visualisation of the surrounding environment. Integrated with critical mission data and enabling the crew to ‘see-through’ their vehicle’s armor in real time, IronVision allows fighting in “Closed Hatches”, while maintaining full situational awareness.

Both ASCOD vehicles have been developed using GDELS’ new “Common Base Platform Design” (CBP) with modular capability and open vehicle architecture with three power-pack solutions between 530, 600 and 800kW, either steel tracks or rubber bands and multiple configurations up to the crew of three plus eight dismounts. The advanced CBP design ensures all ASCOD variants are on one common platform for a reduced logistics footprint. This also facilitates cross-national vehicle manufacturing and operational interoperability between different military users in response to the political vision to foster defence cooperation across Europe.

GDELS also introduces the PANDUR 6×6 EVO, the new version of its proven PANDUR vehicle family. With a GVW up to 18.5t, the PANDUR 6X6 EVO in its Armoured Personnel Carrier (APC) configuration has been selected by the Austrian Army. Due to its new innovative hull design, driveline technology, and power-pack, the compact 6×6 vehicle provides a significantly increased level of protection, payload, and mobility while accomodating a crew of 11 soldiers (3+8). The PANDUR 6×6 EVO is fitted with a 12.7mm Remote Controlled Weapon Station.

The new VFB is a flexible and modern bridge system, which can be temporarily or permanently fitted on various medium-weight wheeled and tracked armored vehicles. With the Bridge Launching Mechanism (BLM) by Pearson Engineering, the Variable Folding Bridge can be attached to the vehicle via a standard Pearson Engineering Jettison Fitting Kit. The VFB on display is mounted on a standard 8×8 wheeled armoured vehicle PIRANHA 3 and has a length of 15m with a load capacity of MLC50. 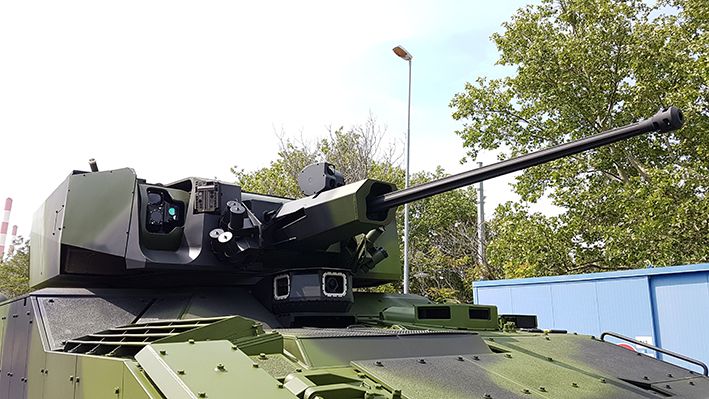