On 6 and 7 July, Arquus organised the third annual edition of Technoday – a technology-centric conference aimed at promoting and encouraging innovation in ground-based defence systems.

Presenting the progress made in the last two years in future-oriented domains such as operational power generation and innovative maintenance and support solutions, Technoday was an opportunity to exchange ideas, to compare perspectives, to answer questions and to guide the future work of Arquus’ engineers. The company chose to focus attention on six major themes: energy transition; robotisation; digitalisation; survivability; support; and industrial innovation.

For the first time, Arquus opened the conference to partner companies, with whom it works hand in hand to assure solution improvement and development of potentially breakthrough innovations. Cerbair, Internest, Robotics Industrie, Prévision IO, Squadrone and Air Captif all participated, as well as the VEDECOM Institute. Arquus also works with leading engineering schools, such as ENSTA Bretagne. These partnerships are intended by Arquus to create new perspectives on future land defence applications, and to meet the growing demand from those students who seek to broaden their skills in the technologies and major challenges of land systems engineering in highly technical fields. In this context, in 2018 Arquus created a chair dedicated to defence innovation at ENSTA ParisTech.

The conference also showcased a number of technological innovations from parent Volvo Group, from which the company benefits in addition to its own resources, and adds to the very practical nature of the solutions Arquus offers for military applications. Based on civilian technologies that have already been proven under very difficult conditions, they are particularly well-suited to the very specific requirements of the battlefield.

The SCARABEE platform, which embeds the company’s latest developments in survivability, digitalisation, robotisation and energy, lay at the heart of Technoday. The vehicle is designed to accommodate multiple plug-and-play systems, courtesy of the Arquus BATTLENET vetronics suite and battle management system (BMS). Aggregating data from multiple sensors and effectors, the BMS synthesises and presents all information on a single screen, easing the commander’s decision-making process and cognitive load. Technoday featured SCARABEE with a remotely-operated turret combining optronics, an effector and an independent smoke-launching crown, as well as an aerial drone that can be piloted from BATTLENET, highlighting the important issue of autonomous or semi-autonomous objects their association with land vehicles. Arquus is also continuing work on the MISSION EXTENDER, a robotic module designed to accompany SCARABEE and augment its tactical capabilities, effectively performing the ‘wingman’ role.

In the counter-drone sphere, Arquus is also considering development of new capabilities through integrating detection, jamming and specific effector functions.

For Arquus, innovation means constantly questioning conventional wisdom and seeking simpler, more economical solutions. To face tomorrow’s challenges, the company seeks to be more than ever side by side with the armed forces, identifying with and for them the opportunities for gains on the ground, and by exploiting their feedback. 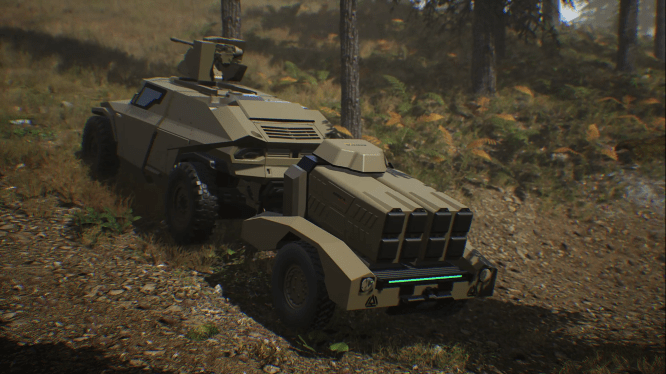 SCARABEE with the robotic MISSION EXTENDER module, which effectively fills a ‘wingman’ role for the vehicle. (Photo: Arquus)
