ARA STORNI, the third (of four) BOUCHARD-class OPVs ordered from France, was commissioned into the Argentine Navy at Buenos Aires Naval Air Station on 3 December.

The vessel now travels to Mar del Plata Naval Base, where it will form part of the Maritime Patrol Division. Built by Naval Group at Cocarneau, France, STORNI was launched in May 2020 and sailed – under Argentine command – on 10 November, with a crew that had spent four months training at Naval Group University. The vessel is the third of the French built OPVs: ARA BOUCHARD was received in February 2020, ARA PIEDRABUENA in June this year and ARA CONTRAALIMIRANTE CORDERO, is scheduled for delivery in June 2022.

“The incorporation of this new OPV reinforces the operational capacities of the Argentine Navy for greater maritime patrolling of the Exclusive Economic Zone and the zone of maritime interests; protect[ion of] the renewable and non-renewable resources of the sea and the fulfilment of international commitments regarding the capacity to provide support to the safeguarding of human life at sea and the improvement of support to the Antarctic Bases,” commented Minister of Defence, Jorge Taiana, at the commissioning ceremony.

The ship arrived with three containers on board, one of which completes an earlier delivery for a hyperbaric chamber system, including the staff support functions. Two additional smaller containers delivered equipment to facilitate pollution control at sea. 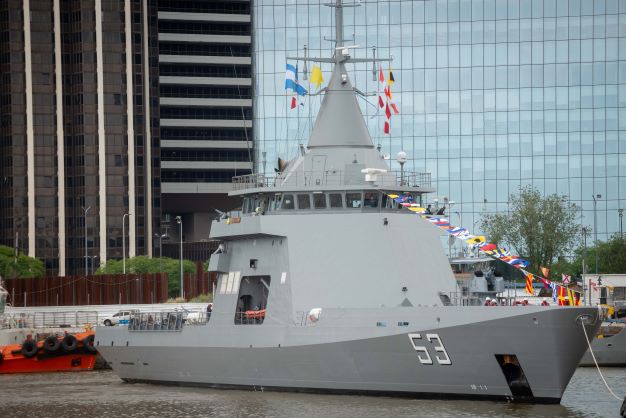