The Argentine government has promulgated Decree 809/2021, assigning additional budget to the Ministries of Defence and Security, including about $220 million (€194 million) for defence.

Funds will be allocated to reopening the Petrel Base in Antarctica, which is expected to become one of Argentina’s main bases on that continent.

The additional budget for the armed forces includes an initial payment of $2 million for the RBS-70NG missiles purchased recently, against a procurement price of about $45 million. For the Navy, the initial payment for construction of 12 tug boats at Tandanor shipyard will be funded. The shipyard will also repair a further three vessels. Conversion of the ARA PARKER corvette into an OPV is now authorised, as are modernization of more AB-206 helicopters for the Army, and the recovery of three Army heavy transport barges used on the Paraná River.

Among allocations for the Security Ministry are ARS1.8 billion (€15.7 million) for two Airbus EC225 helicopters, modernisation of an additional DAUPHIN for the Coast Guard, and overhaul of helicopters for that force, the Federal Police and the Gendarmerie. 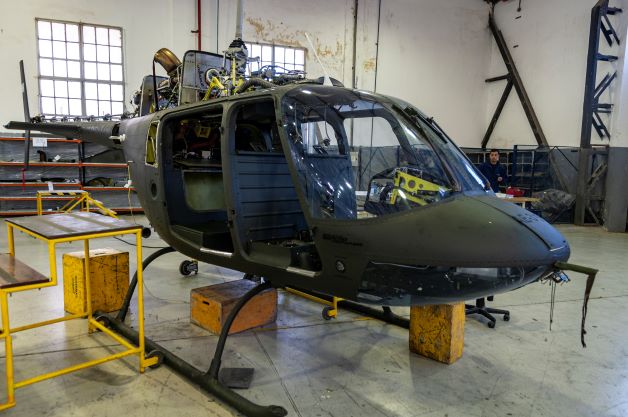 Helicopter overhaul and repair figures high on the list of programmes authorised by the additional funding. (Photo via author)