On 13 May, the Argentine government authorised a $76 million (€62.4 million) contract with Fabrica Argentina de Aviones (FAdeA) for the PAMPA III training aircraft programme. The contract includes modernisation of three IA-63 PAMPA II airframes to the PAMPA III configuration as a first step towards standardising the entire fleet on the latest version.

The three aircraft to be modernised all currently serve with the Argentine Air Force’s IV Air Brigade. The first has not flown since 2007, and was shipped to FAdeA in 2011 for upgrading to PAMPA II standard – an operation never completed, so it has remained in the factory ever since. All the aircraft will be modified to the PAMPA III Block II standard, which includes the Elbit Systems Embedded Virtual Avionics (EVA) and datalink system, in addition to the equipment already installed in the other PAMPA IIIs, such as a full glass cockpit and a new computer. They will also receive the 3,950lb-thrust Honeywell TFE731-40-2N engine, which equips nine PAMPA IIs and all PAMPA IIIs.

The contract also calls for the delivery of six new PAMPA IIIs, one of which should be ready before the end of 2021, to be followed by two more in 2022. Currently, the Air Force has 17 PAMPA IIs in IV Air Brigade and 6 PAMPA IIIs with VI Air Brigade, in addition to two PAMPA IIIs being used in test programmes. 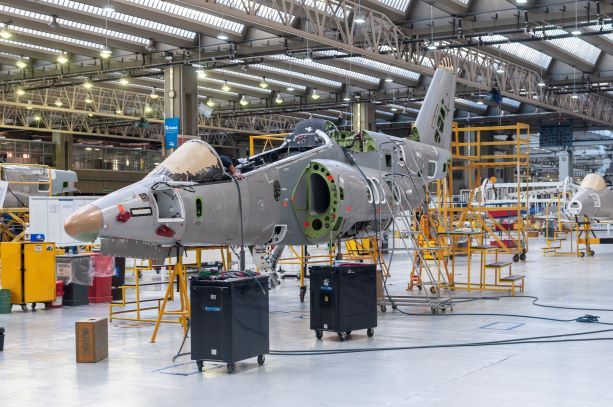 One of the PAMPA IIIs on the assembly line in May. (Photo: Santiago Rivas)