Delivered Under 2017 Order for 16 Helicopters

Indian naval air station INS Utkrosh, which is under the joint-services Andaman and Nicobar (A&N) Command in the Bay of Bengal, has inducted into service the Mk III variant of the indigenous Dhruv Advanced Light Helicopter (ALH).

Images released by the Indian MoD show at least two examples of the latest ALH variant entering service in a ceremony held on 28 January at Port Blair that included the traditional water cannon salute.

The MoD said in a statement that the induction marks “a continuing increase in the capabilities of the A&N Command” as well as a “leap towards self-reliance in the field of military aircraft”. It also stated the new rotorcraft will act “as a force multiplier in keeping India’s far eastern seaboard and Island territories safe”.

The Indian Navy (IN) has already equipped at least two of its naval air squadrons with the ALH Mk III, which is built by state-owned manufacturer Hindustan Aeronautics Limited (HAL). For instance, the first three ALH Mk IIIs delivered to the IN are currently in service with the ‘INAS 323′ squadron at INS Hansa in Goa. Moreover, on 7 June 2021 ‘INAS 322 Dega Flight’ in Visakhapatnam, became the IN’s second squadron to operate this variant.

The IN’s ALH Mk IIIs are being acquired as part of an order for 16 units placed in 2017. A further 16 ALHs were ordered around the same time for the Indian Coast Guard (ICG). In IN service, the 5.5t, twin-engined rotorcraft are set to carry out maritime reconnaissance, coastal surveillance, special forces support, and SAR operations, among other things. They will supplement, and eventually replace, the IN’s and ICG’s ageing fleets of licence-built Chetak (Alouette III) light utility helicopters (LUHs), which are reaching the end of their total technical life.

According to media report, some of IN’s Mk IIIs are also being equipped with an indigenously developed low-frequency dunking sonar. 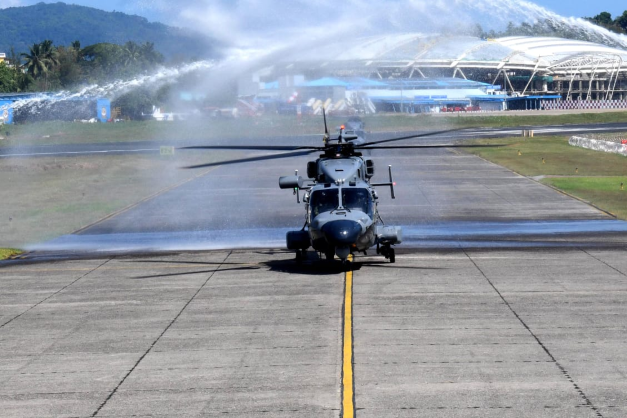