The Akaer group, headquartered in Sao Jose dos Campos, has delivered the first new wing it has built for the Brazilian Air Force’s fleet of nine P-3AM maritime patrol aircraft. This has been installed on the aircraft and the second wing will be delivered before the end of the year

Brazil bought 12 used P-3s from the US Navy in 2008. The type, which entered active service in 1962, is still in use with more than 20 military and civilian operators. Akaer says the new wings will extend the fatigue life of the structure, meaning each aircraft’s active service will be extended by a further 10 years.

The company used the project as “a platform to integrate Industry 4.0 concepts and tools,” it states. These included using digital-twin simulations to trial different elements in a virtual environment, and advanced manufacturing techniques. The job includes replacing upper skins, spars, wing/fuselage centre boxes and fuel and electric systems components. 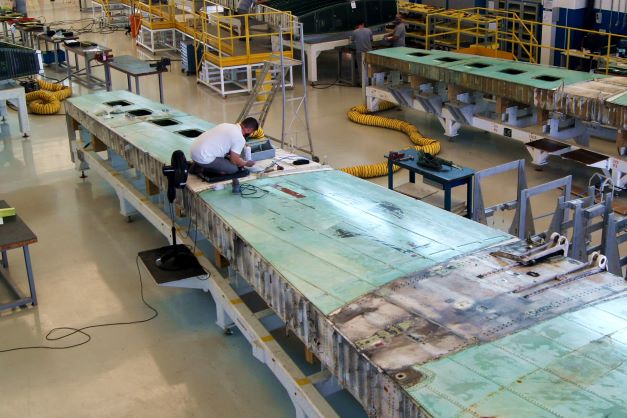 A technician works on a P-3 wing. (Photo: Akaer Group)