A new option is available from today for anyone wishing to acquire high-resolution imagery of the Earth from space. Following the successful launch in April of the first in Airbus’s four Pléiades Neo 3 spacecraft, and a period during which the system has been tested and optimised, Airbus Defence and Space has declared its commercial capability open for business.

“The primary set of images acquired just a few days after the launch were breath-taking,” the company stated. “The commissioning phase which took place [in] the weeks and months that followed, allowed fine-tuning this already impressive level of quality.”

The firm has opened a website – the OneAtlas platform (oneatlas.airbus.com) – within which customers can set up an account, buy imagery, and even task the satellites to cover a particular location. A series of instructional videos explains each step in the process.

Company literature emphasises that the sensors’ 30cm resolution, 14km imaging swath and geolocation accuracy of under 5m is sufficient to allow “positive identification of mobile or fixed target status, and the ability to plan a potential follow-up activity“.

Two of the four-strong fleet have now been launched. Once the other two satellites reach orbit next year, the company says it will increase daily coverage to two million km2. 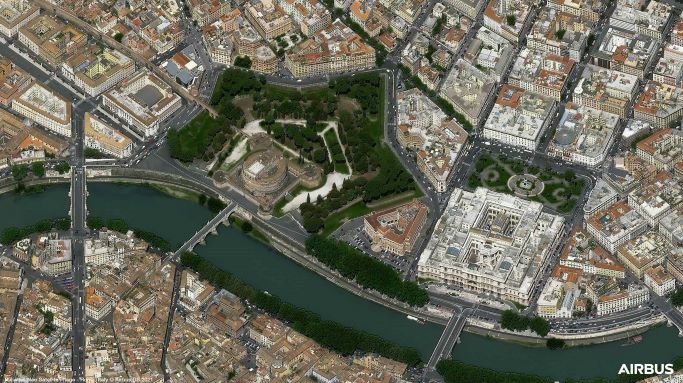 A view of Rome, taken by sensors on board one of the Pléiades Neo constellation spacecraft, at an angle of 41°. (Image: Airbus)