UltraAir Has Implications for Military and Civil Aircraft

Under the European Space Agency’s (ESA) ScyLight [Secure and Laser Communication Technology] programme, Airbus and the Netherlands Organisation for Applied Scientific Research (TNO) have launched a programme to develop a laser communication terminal demonstrator for aircraft, known as UltraAir, they announced on 8 April.

The project, co-financed by Airbus, TNO and the Netherlands Space Office (NSO), covers design, construction and testing of the technology demonstrator. Laser communication technologies are the next revolution in satellite communications (satcom), bringing unprecedented transmission rates, data security and resilience to meet commercial needs over the next decade.

The UltraAir terminal will be capable of laser connections between an aircraft and a satellite in geostationary orbit (36,000km), including a highly stable and precise optical mechatronic system. The demonstrator will pave the way for a future UltraAir product, with which data transmission rates could reach several GB/s while providing anti-jamming and low probability of interception. UltraAir might thus not only enable military aircraft and UAS to connect within a combat cloud, but also in the longer term allow airline passengers to establish high-speed data connections using the Airbus SpaceDataHighway constellation. From their position in geostationary orbit, the SpaceDataHighway (EDRS) satellites relay data collected by observation satellites to Earth in near-real-time, a process that would normally take several hours.

Airbus is leading the project and brings its unique expertise in laser satellite communications, developed in the SpaceDataHighway programme. It will coordinate development of the terminal and both ground and air testing. TNO will contribute its experience in high-precision opto-mechatronics, supported by Dutch high-tech and space industries. Airbus Defence and Space in the Netherlands will be responsible for terminal production, while Airbus’ subsidiary Tesat brings its technical expertise in laser communication systems and will be involved in all testing activities.

Initial tests will take place in late 2021 in laboratory conditions at Tesat. In a second phase, ground tests will start early 2022 in Spain, where connectivity will be established between an UltraAir demonstrator and the laser terminal embarked on the ALPHASAT satellite, using the ESA Optical Ground Station. For final verification, the UltraAir demonstrator will be integrated on an aircraft for flight testing by mid-2022.

As demand grows for satellite services, traditional satcom RF bands are experiencing bottlenecks. Laser links have the additional benefit of avoiding interference and detection as, by comparison with the already-crowded radio frequencies, they are extremely difficult to intercept, due to much narrower beams. Laser terminals can thus be lighter, consume less power and offer better security than radio.

This new programme key to Airbus’ overall strategy to drive laser communications further, illustrating the benefits of this technology as a key differentiator for providing multi-domain collaboration for government and defence customers. 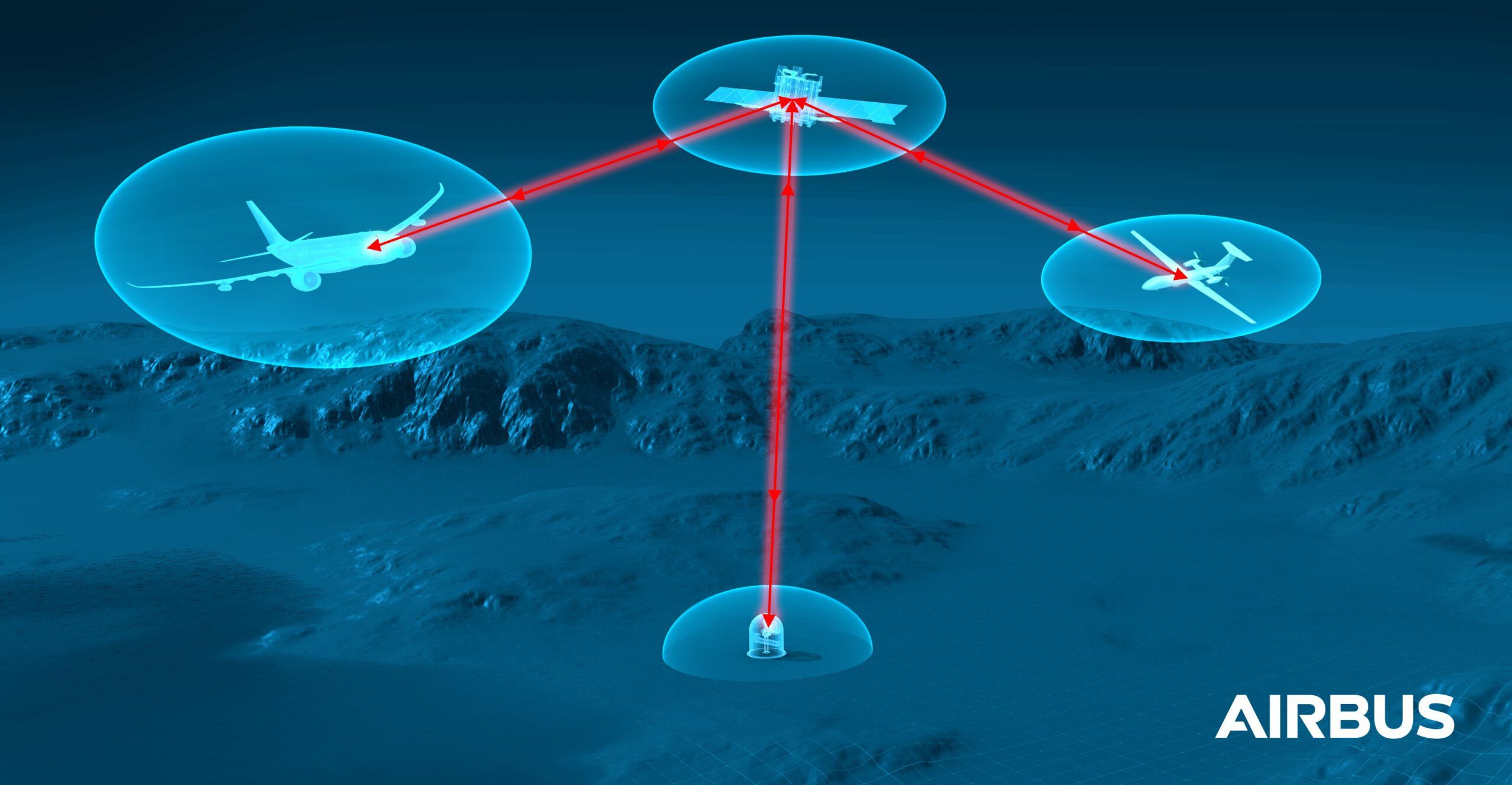 UltraAir will have significant implications for satcom security and utility. (Image: Airbus)