Focus on ‘Now, Here and Soon’

‘Right or Wrong – leave the country.’ At the extraordinary NATO ministerial, convened on 20 August in the aftermath of the Afghan political and military collapse following withdrawal, the Alliance – currently in the eye of the storm – decided to focus on the here, now and soon, rather than looking backwards.

The collapse was a “tragedy,” a worried Secretary-General Jens Stoltenberg said, repeatedly. But the “main focus,” now, should be on “getting people out of the country,” in line with the declaration by the 30 allied foreign ministers.

Indeed the withdrawal, which affects approximately 800 NATO personnel, including Afghans (partly evacuated), plus thousands of officials from other nations, is proving challenging. There is no lack of aircraft, provided in abundance by the USAF and allies: but it is difficult “to get people – especially Afghans – into the airport process and on the planes,” – either due to friction with the Taliban or for security reasons. Additionally, the 31 August deadline for evacuation 31 August is too tight: at the time of writing, urgent discussions were under way on an extension.

The second priority is to try to stabilise the Afghan situation, as far as that is possible. By making diplomatic recognition and funding (humanitarian aid excluded) conditional on the new government’s compliance with commitments, such as not letting Afghanistan again become a safe haven, or ‘launching platform’ for terrorists, respecting human and women’s rights and creating a representative government. Also, if necessary, with the support of neighbouring Pakistan.

Finally, given the storm of criticism, a “clear-eyed assessment of NATO’s engagement” from the very beginning is required, as is an understanding of the collapse, to be able to draw critical lessons from it. Simultaneously, NATO continues to face enormous challenges – Russia and China foremost.

The extent of this reflection is unknown – but it is unlikely to result in any (potentially disastrous) plea of ‘mea culpa.’ As for when – or if – any comprehensive answers might emerge to the numerous questions raised in recent weeks will emerge, who knows? Such questions centre on the decisions both to intervene in Afghanistan and to leave in this manner – causing a potential flood of refugees that spreads enormous concern across Europe – as well as the reasons for the miserable failure of a process of nation-building in which so many had placed their trust.

The bitterness of NATO allies – Great Britain above all – at being presented with a fait accompli, without any say in the matter, after spending so much treasure and blood, remains an issue to which there has been no real response.

Serious questions remain concerning errors made by US administrations from President Obama onwards, particularly President Trump’s unilateral February 2020 decision to abandon a condition-based withdrawal in favour of a direct agreement with the Taliban, later confirmed by President Biden – perhaps influenced by internal factors, with mid-term elections already on the horizon.

Given the Alliance’s decision to become more ‘political’ and to engage in more discussion, enshrined in the NATO 2030 strategy just two months ago, an answer to the predominant role played by the US in NATO must now be directly addressed.

The medium and long-term consequences of withdrawal are impossible to predict – which does not give NATO any excuse not to examine its conscience, understand its mistakes and provide at least partial, defensible answers to these questions. Avoiding over-engagement and recalibration of the multiple relationships within the Atlantic Alliance – especially with the EU – also cry out for resolution. 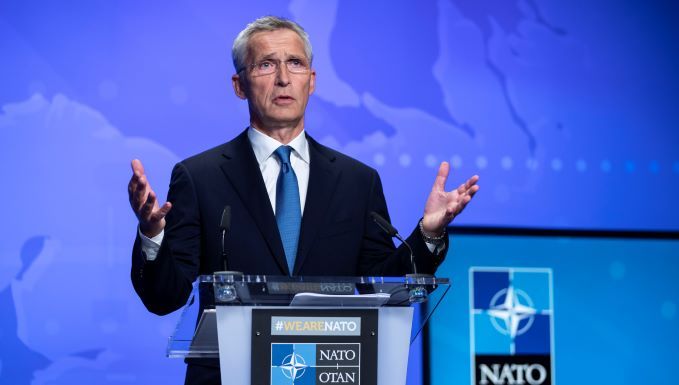 Time for some answers. Sec-Gen Jens Stoltenberg during the 20 August Ministerial. (Photo: NATO)