Despite the proliferating threat of communications interference technology, currently being employed by so-called Near Peer adversaries including the likes of the Russian Armed Forces in Ukraine, military components remain fierce advocates of satellite communications (SATCOM) for expeditionary campaigns.

According to Organisation for Security and Co-operation in Europe (OSCE) Special Monitoring Mission reports arising out of eastern Europe on 17th January 2017, described the presence of mobile jamming communication systems in the theatre, capable of interfering with military-grade GPS signals across the battlespace.

However, despite such provocations, the military SATCOM market continues to grow, particularly as industry continue to satisfy growing demands from the armed forces to extend SATCOM On-The-Move (SOTM) capabilities. Additionally, SATCOM can be tasked for much more than communications with mission sets including intelligence-gathering missions and precision navigation.

According to Spectra Group officials explained how the domain of military communications continued to evolve away from, “…days of large forces moving into an area and setting up bases and communications infrastructure.”

Speaking to Monch, company sources described: “Many operations require forces to operate large distances apart or from their bases. Traditional UHF and VHF networks are ‘Line of Sight’ [LoS] and therefore repeaters have to be used in order to extend the network.These repeaters have to be defended if ground-based and are expensive and sometimes unavailable if airborne. Access to UHF TACSAT [tactical satellite] channels has always been limited to the highest priority users and, even then, it was not always guaranteed. This created an opportunity for Spectra to offer a complementary service utilising readily available commercial satellite capacity.”

Referring back to recent operations in Afghanistan and how operations have further developed, Spectra Group’s Chief Executive Officer, Simon Davies illustrated: “The nature of conflict has changed and so have the information requirements of the commander right through to the front line soldier. Now, more than ever, the provision of reliable and resilient voice and data communications is essential at the tactical level. As the nature of conflict changes and high-tempo, short duration, deployments become the norm, we have pulled out all the stops to ensure all our systems are designed for ease of use and reliability, thereby reducing the burden in the modern battlefield…providing voice and data services in areas where none exist or where high intensity conflicts, natural disasters, terrorist attacks or pandemics have destroyed existing networks. SATCOM is incredibly important to current operations and commercial SATCOM provides a complementary solution to that can fill the gaps in military resources. The emergence of MANET will only make commercial SATCOM more important, as these higher bandwidth solutions will place an increased load on finite satellite availability.”

On 31st January 2017, Spectra Group announced it had extended the capability of its SlingShot solution, designed to convert legacy VHF and UHF tactical handheld and vehicle-mounted communications systems into more “robust, reliable and cost-effective” L-Band Beyond Line of Sight (BLOS) Communications on the Move (COTM).

Reliant upon the Inmarsat’s L-TAC satellite constellation, SlingShot has been introduced to extend secure communications over, “…thousands of miles, to connect dismounted, mounted and air and seaborne personnel to each other and to headquarters,” according to Davies. “The system has been further improved with new power options and the launch of the SlingShot TLT (Test Loop Translator)- an L-Band Satellite emulator for full offline system testing without a live satellite channel; a Universal Power Supply solution providing flexibility in power requirements; as well as AA battery cassette capable of powering the radio in man-pack form factor. The TLT comprises a programmable test tool, allowing operators to train with the system as though it was in real-time operational use by simulating satellite connectivity without expenditure.”

“There is no need for reconfiguration or frequency programming. It behaves as a satellite transponder and only reacts to the incoming RF from SlingShot. All that needs to be done is to ensure the supplied Transmit/Receive antennae are connected, plug it in and it is ready for testing,” company literature reads.

“New power options for SlingShot deliver increased flexibility and even simpler configuration. The unique system for BLOS COTM for in-service tactical radios now makes deployment-planning and set-up even easier,” Davies continued to explain. “As the nature of conflict changes and high-tempo, short duration, deployments become the norm, we know the onus is on us to ensure all our systems are designed for ease of use and reliability, and ideally suited to the fast-moving modern battlefield.”

Describing how such a capability is becoming more prominent across the contemporary operating environment, Spectra sources described to Monch how more than 2,000 lightweight ‘bolt-on’ communications packages have been supplied to more than 15 military organisations in the Americas, Europe, Africa, the Middle East, and Asia Pacific.

“The L-Band omni-directional antennae also deliver true COTM, no need to pause, locate and fix the satellite beam, at any speed. The nature of the coverage offered by L-TAC allows beams to be booked on a monthly basis and with the capability of having large, narrow beams, or more specific, multi-headed beams. Such flexibility greatly adds to the ability to move fast and respond to adapting situations,” sources added. “Because the radio can easily be switched from L-Band to its native frequency, the need to carry an additional bulky and heavy radio actually reduces the burden whilst massively increasing the capability. Another advantage is that it can enable interoperability between VHF and UHF radio networks allowing government departments to communicate directly even when they have different radios.”

Also aimed at exploiting requirements for tactical communications in the expeditionary environment is Airbus Defence & Space (DS) which is now providing SATCOM support to multi-national and coalition operations across Africa.

According to a company announcement made on 3rd February 2017, Airbus DS revealed it was now supporting European Union (EU) military missions in Mali, Niger and Somalia, as force elements continue to require robust and efficient communications solutions at reach and over-the-horizon.

Missions include the EU military training missions in Somalia; EU capacity-building mission Sahel Niger and EUCAP Sahel Mali civilian missions, all of which are being supported by C-band solutions providing connectivity between African theatres of operation and headquarters components across Europe.

“Airbus DS teams have deployed C-band SATCOM systems between Europe and Somalia, Niger and Mali, as well as satellite-based mobile phone terminals to enable communications in Malian and Nigerien territories,” the company explained.

The deal falls under Airbus’s SATCOM agreement with the European Defence Agency which includes X-band and UHF-band military services as well as C-, Ku-, Ka- and L-band SATCOM.

“The EU SatCom Market agreement allows EU member states to consolidate their requirements and purchase satellite communication capabilities in a coordinated manner, thus ensuring more economical and reliable access to SATCOM services,” Airbus explained. “Around 20 ministries of defence in Europe and EU organisations are taking part in this project, which allows them to equip themselves with SATCOM solutions and services across the globe. Satellite communications are a mission-critical instrument for connecting command and control centers, as well as intelligence, surveillance and reconnaissance (ISR) tools. In light of the increasingly common use of high-throughput applications, like RPAS on battlefields, a great amount of SATCOM is needed to enable the control and transmission of data acquired by sensors.”

Meanwhile, Raytheon is responding to emerging requirements from the battlefield with the development of anti-jamming SATCOM technology. The concept has been initiated by the US Air Force which has contracted Raytheon with a U$37 million contract designated the Protected Tactical Services Field Demonstration.

The concept aims at providing continuous connectivity between tactical customers on the ground through to component command elements across contested and congested operating environments.

According to the USAF, PTSFD will, “…demonstrate the ability to provide wideband anti-jam communications to tactical users using the Wideband Global Satellite Communications (SATCOM) constellation and commercial SATCOM.”

No further details were provided by the air force although sources confirmed work on the programme was expected to run through to 2020.

However, a Raytheon’s Director of Protected Communications Systems, Brian Gray, revealed: “Eventually, hardware developed and tested under the PTSFD contract can be deployed as upgrades to existing satellite communication terminals. By reusing the antenna and RF front end of existing terminals, costs are greatly reduced, since those are the most expensive elements of any SATCOM terminal. In today’s global environment, affordable, protected and resilient satellite communication is crucial. The new, protected SATCOM system will bring a distinct set of capabilities, including flexible access to commercial and government SATCOM channels for seamless transition between SATCOM systems to maximize communications availability for tactical forces.”

SATCOM specialist SES is also pursuing lower cost options for users, based around the deployment of aerostats in order to maintain connectivity while also doubling up capabilities with surveillance technology.

The Tactical Persistent Surveillance (TPS) was unveiled by SES in September 2016 to provide a “fully integrated portable surveillance and communications solution”, designed for, “enhanced situational awareness for border security, special event monitoring and disaster response missions around the world,” according to explained Head of Government Market Solutions Centre at SES, Nicole Robinson.

“TPS brings together advanced surveillance and communications technologies to help governments around the world address their defence, security and disaster response challenges more rapidly and effectively than before,” Robinson continued.

The system can be deployed within 30 minutes, making it suitable for expeditionary operations in communications deprived areas.

Finally, Trivec-Avant has made available its AV2140-1 UHF SATCOM antenna to communications specialists including the likes of Harris Corporation, General Dynamics, and Thales. The antenna solution can be integrated on board multiple legacy and next-generation radio systems, allowing them to also also double up as a LOS solution. The company displayed the antenna at the Association of the US Army (AUSA) annual convention in Washington in October 2016, designed as an OTM capability with omni-directional antenna which weighs just 1.3kg.

The antenna allows manpack radio solutions to operate across frequencies 243-318 MHz UHF SATCOM; 30-88 MHz VHF/LOS; and 225-512 MHz UHF/LOS, including capacity to communicate with the US Navy’s Mobile User Objective System (MUOS), the fifth satellite of which (MOUS-5) achieved operational orbit in November.

Despite the proliferating threat of jammed communications from near-peer adversaries, the reliance upon SATCOM and SOTM capabilities looks set to continue into the near and medium term as armed forces continue to rely upon mature connectivity sets. However, as the operating environment continues to evolve back towards more conventional operations, the market is set to see ongoing popularity in alternative means of communication including MANET solutions. 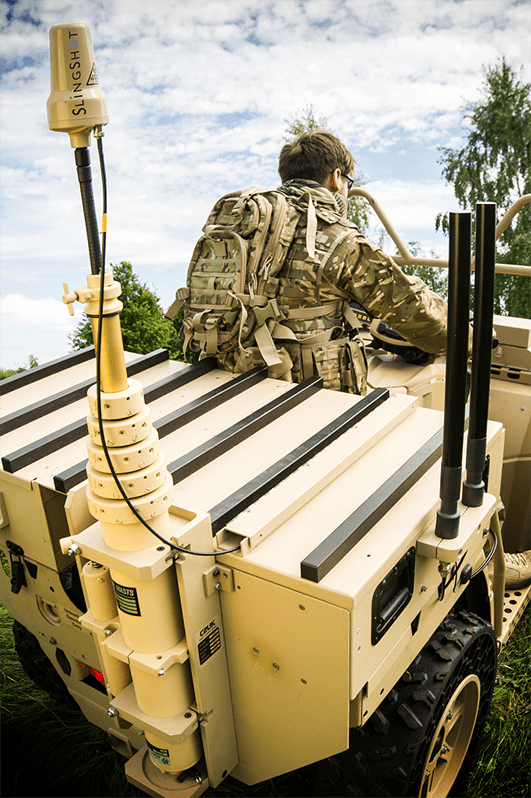