A year ago, Aero Vodochody Aerospace was celebrating the first build of an L-159 for an export customer. By late December it was flying and handed over to the Iraqi Air Force (IQAF). Today it is one of two dual-seat L159T1s at the Prague-based company used to train IQAF pilots.

In early 2018, both trainers should be delivered to Balad Air Base, where the other ten single-seat L159s have been playing a big part in ousting Daesh (aka self proclaimed Islamic State – IS) from the war-weary country. While the company is quite justifiably proud of its work with Iraq, it isn’t sitting on its laurels. The new Italian management team, led by ex-Finmeccanica Aeronautics CEO, Giuseppe Giordo is pushing through several new L159/L-39NG programmes as they bid to transform the Czech company.

All but one of the 48 L-159s which were once stored in the hangars, are now gone with the majority sold to Iraq (12) or Draken International (21), Aero’s partner in North America which uses them for Red Air training.

Giordo told MONS in mid-September during the L-39 User Group conference, “we are very optimistic about the single-engine, more economical advanced light combat aircraft (ALCA). We are relaunching the aircraft at a time when many air forces are looking at curbing their operational costs.”

The 24 L159s delivered to the Czech Air Force (CzAF) in the early to mid-2000s are in their original state and in need of a refresh. Initially designed in the mid 1990s, it lacks a much-needed targeting pod, as well as the ability to use laser guided bombs or smart weapons which can be a big disadvantage in modern close air support (CAS) ops. So it is not surprising that Aero Vodochody is offering a comprehensive upgrade package to the Czech Air Force, that would address such obsolescence.

No decision has yet been made by the CzAF, while the IQAF might show some kind of interest. However, the CzAF has gone ahead with the acquisition of eight upgraded L159T2s. They will feature new cockpit avionics including four 7x5in Multi-Function Displays (MFD) instead of the existing 4x4in ones, new GRIFO radar that the T1s didn’t have, as well as wet-wings. Three brand new aircraft are now being built with work on the first fuselage well underway. They should be delivered by the end of 2018 and will be joined by the CzAF’s five L159T1s which are being upgraded to the same T2 standard.

Structures for the first three L-39NGs are now being assembled at Aero. The first pre-series aircraft is expected to fly in the third quarter of 2018, and delivered in full trainer capability during late-2019 to LOM Praha, which runs the Czech AF’s flying training. Certification is expected in November 2019, while the first flight of an aircraft with light attack capabilities is expected in June, 2020.

The L-39NG will be powered by the Williams FJ-44-4M, which replaces the Ivchenko AI-25 that powered the original L-39s.

Marco Venanzetti, previously Senior VP, Flight Operations at Alenia Aermacchi joined the company as Executive Vice – President L-39NG, in August 2016, told MONS: “The basic configuration of the light attack L-39NG will have five hard points – one on the centre-line and two under each wing. The basic configuration which we are going to clear, will have two 350 litre wet-tanks, Mk 81/82 laser guided/free falls bombs, CRV-7 unguided/guided rocket launchers and single/twin barrel gun-pod which will be available on the centre-line as well as on two under wing pylons, should the customer need more fire-power. This benchmark will satisfy 80% of our customers.”

Mr. Venanzetti, who has flown 96 aircraft during his career as a test-pilot added, “with the aircraft’s architecture, we can integrate a targeting pod too if the customer wishes. On the weapons front, we can offer the IMI [Israel Military Industries] 125kg and 250kg bombs which are exactly the same as the Mk81/82 ones and will certify as required, in addition to the 50kg bombs for precise targeting.”

Configuring the aircraft to a light attack version, will mean the installation of two boxes housing a Stores Management System (SMS) and Weapons Management Systems (WMS) to manage the weapons. With wet wings you can also have AIM-9L SIDEWINDERs on the wing rails. Meanwhile, Aero announced at the L-39UG that it had adapted the L-39CW designation for those customers who might want to integrate avionics and the new engine into their original L-39s, before upgrading to the new L-39NG airframe. 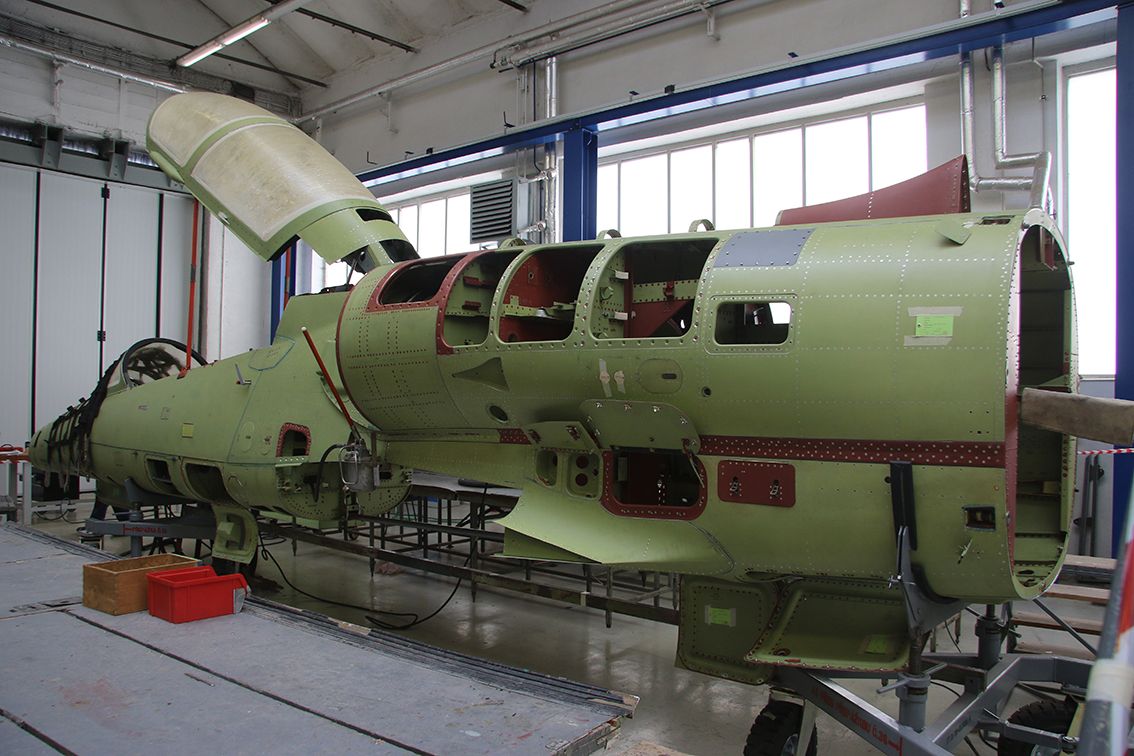