Amid the consequences of the war in Ukraine – and a €200 billion increase in EU defence budgets – European rearmament is not that surprising. What is quite extraordinary, however, is that Brussels aims to do it jointly – for the first time in history.

On 18 May, the European Commission placed another piece in the complex but incomplete mosaic of European defence. In line with leaders’ decisions in Versailles and the Strategic Compass provisions, the EU executive presented an analysis of EU defence gaps, co-prepared with the EDA, and came up with solutions, including a joint procurement instrument. After decades of ‘uncoordinated’ cuts, the idea is to coordinate efforts to spend big money, and to close defence gaps while fighting inefficiency, fragmentation, and the other bêtes noires of European defence. All this using – and herein lies another novelty – the common budget.

The wake-up call on the European need for rearmament has been the war in Ukraine. The conflict roused the EU from its strategic sleep and dreams of peace – and made starkident the need to adapt the EU industrial base to the “return of high-intensity conflicts“, as Market Commissioner, Thierry Breton, said.

It also led to the emptying of EU member states’ stockpiles and a €200 billion increase in their defence budgets, reversing a longstanding trend of cuts. Between 1999 and 2021, EU defence spending increased by 20%, against 66% for the US, 292% for Russia and 592% for China. An enormous difference – and there’s more! While fragmentation and overcapacity are still rampant, investment cooperation in 2021 reached just 11% of total investments – against the 35% recommended by EDA. In addition, as Breton said, 60% of defence expenditure has been spent on imports from non-European countries.

All these reasons pushed the Commission to propose a joint procurement instrument, which is anticipated to evolve over time. The first step is establishing a Defense Joint Procurement Task Force, to coordinate the immediate needs of procurement and replenishment. These centre mainly stockpiles of ammunition, replacing Soviet-era systems, initial supplies and logistics support, force protection and mine countermeasures.

The Commission wants to allocate €500 million as an incentive for investing together, emulating what has been done with the European Defence Fund, which has proven to be a success story.

The use of EU money for joint purchases is another absolute novelty. And is something (wrongly) seen as controversial: wrongly, as the provision under which the EU budget cannot be used for military purposes applies only to operations, not procurement. As for the potential, in this first phase, for purchases to be also made outside Europe –  another potential reason for eyebrows raising –  it must be recalled that this does not apply to the following step of the mechanism.

Indeed, in the third quarter of 2022, the Commission will create a regulation establishing European Defence Capability Consortia, where member states will jointly procure capabilities exclusively developed within the EU, additionally benefitting from VAT exemption and other EU financing. This time, the gaps to be addressed will concern more significant assets, such as augmented air-to-air refuelling or counter-UAS capabilities, modernisation of fighters, air defences, artillery, next-generation land systems, cyber capabilities, C3I, anti-access denial as well as space and cyber capabilities, among others.

In this way, adding a new promising tool to the mechanisms already extant for capability development, Brussels takes another step – one unimaginable just months ago – towards some kind of common defence. The road is still long, but things move fast and, as they did for the COVID and energy crises, in a joint and common fashion. 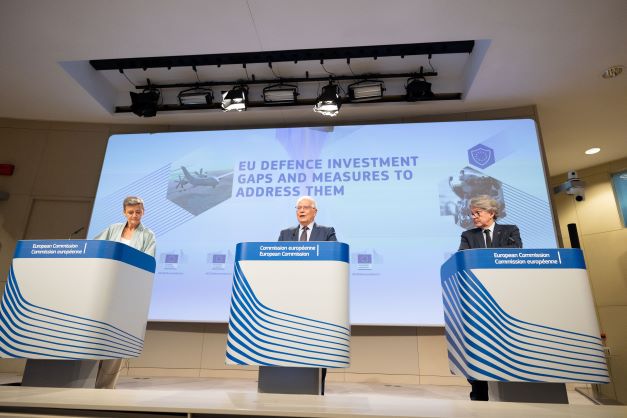